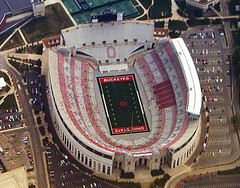 This headline caught my attention this morning while reading our local newspaper, “The Columbus Dispatch:”

Clarett among hundreds of felons admitted to Ohio schools

In case you don’t know, Clarett is Maurice Clarett who led the Ohio State Buckeyes to the 2002 national championship during his freshman year. He pleaded guilty in 2006 to aggravated robbery and carrying a concealed weapon, and served 3 1/2 years in a Toledo prison. On Monday he started taking classes again at Ohio State.

His return to classes has created a lot of buzz, but what really caught my attention was the statement  “he’s hardly the only person with a criminal record attending a central Ohio college.”

Here are some interesting tidbits from the article:

Most central Ohio colleges ask applicants to report whether they have ever been convicted of a crime or suspended from another school. Those who say yes are asked to provide more information. A committee of campus officials reviews the nature of the offense, when it happened and whether it is part of a criminal pattern. The committee also looks at what applicants have done since being convicted.

This holistic approach is also a recommended best practice for employers when hiring. If the applicant has a conviction, look at the nature and gravity of the crime, the nature of the job, and the age of the crime to determine whether there is a business justification to deny employment. Also, employers should review the individuals entire background – through verifications, references, interviews, etc. to make an informed decision about the individual.

Do you have questions about your background screening program?

Our experts are here to help. Ask a background screening expert.