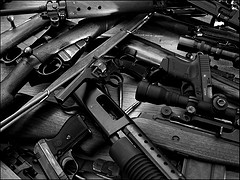 The man in the baseball-type cap was clear about his task. He was selling weapons at a gun show in Sharonville, Ohio. And he wasn’t troubled about the minutiae of the law.

“I don’t need your address,” he said, shaking his head and waving a dismissive hand across his face. “Nothing.”

“Just show me that you’re from Ohio,” the seller said.

The buyer sounded relieved. “That’s good about the background check,” he said, “because I probably couldn’t pass one.”

“I don’t care,” the seller said. Then, with a chuckle and a toothy smile, he added, “because I wouldn’t pass either, bud.”

Undercover investigators for the New York City mayor’s office secretly filmed this transaction earlier this year as part of a seven-city and three-state study on how easy it is for people who can’t pass a background check to get a gun. Just attend one of the thousands of local guns shows held every weekend across America. Odds are that if the money is green, the dealer will sell a gun. In most cases, no questions are asked.

Read the rest of the story here.

“I’ve worked with Chris Miller for over 20 years and I can always count on FYI to provide quality, accurate information in a timely manner. We rely on FYI heavily for our internet fraud investigations. I highly recommend their services.”