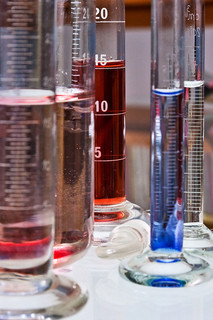 This is part 4 of a 4 part series on workplace drug testing.

Part 3 can be found here.

Who pays for a drug test?  Does an employee have to be paid for time spent having a drug test?

According to the Substance Abuse and Mental Health Services Administration (SAMHSA), an employer normally pays for a drug test.  Also, time spent having a required drug test is generally considered hours worked (and thus compensable time) under the Fair Labor Standards Act (FLSA), a U.S. Department of Labor (DOL) regulation, for employees who are covered by the Act.  These types of issues are overseen by DOL’s Wage and Hour Division.  For further guidance, please contact the closest DOL Wage and Hour District Office.

In most cases it is legal for employers to test employees for drugs.  No Federal laws prohibit the practice.  However, there are several states that restrict or question an employer’s ability to randomly drug test employees who are not in safety-sensitive positions.  Thus, it is very important that employers familiarize themselves with the various state laws that may apply to their organization before implementing a drug-testing program.  Furthermore, under certain circumstances, someone with a history of alcoholism or drug addiction may be considered a qualified individual with a disability under the Americans with Disabilities Act (ADA) and other Federal non-discrimination statues.  As a result, testing for alcohol without individualized suspicions (e.g. pre-employment or random) is not allowable.

How does one start a drug-testing program?

Drug testing is only one component of a comprehensive drug-free workplace program, which also includes a written policy that clearly outlines employer expectations regarding drug use; training for supervisors on the signs and symptoms of drug use and their role in enforcing the policy; education for employees about the dangers of drug use; and an Employee Assistance Program (EAP) to provide counseling and referral to employees struggling with drug problems.  DOL’s online Drug-Free Workplace Advisor helps employers develop customized drug-free workplace policies (that may or may not including drug testing) by reviewing the different components of a comprehensive policy and then generating a written policy statement based on the user’s responses to pre-set questions and statements.  (An organization’s name and logo can be incorporated and further modifications to the statement made if desired.)  If an organization already has a drug-free workplace policy in place, this tool can be used to ensure it addresses all necessary issues.  Because it is important to understand and incorporate the various state and Federal regulations that may apply, it is also recommended that legal consultation be sought before commencing a drug testing program.

A comprehensive drug-free workplace program contributes to a workplace free of the health, safety and productivity hazards caused by employees’ abuse of alcohol or drugs.  By educating employees about the dangers of alcohol and drug abuse and encouraging individuals with related problems to seek help, employers can protect their businesses from such dangers, retain valuable employees and help play a part in making communities safer and healthier.

Resources for a drug-free workplace:

This is part 3 of a 4 part series on workplace drug testing.

What drugs do tests detect?

Testing conducted according to the Substance Abuse and Mental Health Services Administration’s (SAMHSA) guidelines checks for five illicit drugs plus, in some cases, alcohol (ethanol, ethyl alcohol, booze).  These five illicit drugs are:

The typical 8-Panel Test includes the above-mentioned substances plus:

Testing can also be done for:

How long are drugs in one’s system?

Drugs have certain “detection windows”—the amount of time after ingestion during which evidence of their use can be detected by a drug test.  Though it might not be wise to publicize detection windows and invite employees who may use drugs to push their limits, when implementing drug testing, it is important to understand them.  For instance, alcohol is absorbed and eliminated more quickly than other drugs.  This is why post-accident testing procedures often require testing for alcohol to occur within two hours.  Other drugs are eliminated from the system at different rates and thus detectable for different periods of time, often long after the drug’s effect has worn off.  The following are estimates of the length of time that certain drugs are detectable: 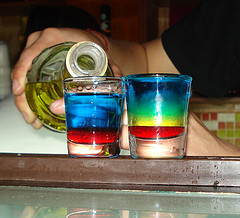 How does a drug test determine if a person has been using substances?  What are cut-off levels and what do they determine?

Aside from a breath alcohol test, drug testing does not determine impairment or current drug use.  Rather, drug testing determines a specified amount or presence of a drug or its metabolite in urine, blood or an alternative specimen.  There is a minimum measurement applied to drug testing so that only traces of a drug or its metabolite above a specified level is reported as positive.  This measure is known as a “cut-off level,” and it varies for each drug.  Setting cut-off levels involves understanding the expected results of testing and determining the needs of the employer’s drug-free workplace program.  For instance, if a cut-off level is set low, test results will come back with more “false positives” as some “passive” users could test positive.  (For example, a low cut-off level could cause a positive result from consuming poppy seeds.)  Conversely, a high cut-off level will result in more “false negatives,” and thus some users may go undetected.  However, a high cut-off level lessens the likelihood of taking action against someone based on “passive” exposure, and for this reason SAMHSA’s guidelines set cut-off levels on the high side. 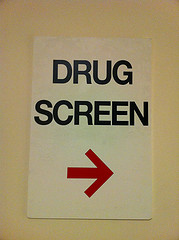 This is part 2 of a 4 part series on workplace drug testing. Part 1 can be found here.

When are drug tests conducted?

There are a variety of circumstances under which an organization may require a drug test.  The following are the most common or widespread:

What are the different methods of drug testing?

There are a number of different bodily specimens that can be chemically tested to detect evidence of recent drug use.  Although some state laws dictate which types of tests can be used, a number of options are technologically feasible.  Urine is the most commonly used specimen for illicit drugs, reflecting SAMHSA’s guidelines, and breath is the most common for alcohol, reflecting DOT’s guidelines.

Other alternative specimens that can be used for detecting the use of selected drugs of abuse include blood, hair, oral fluids and sweat.

This is part 1 of a 4 part series on workplace drug testing.

Drug testing is one action an employer can take to determine if employees or job applicants are using drugs.  It can identify evidence of recent use of alcohol, prescription drugs and illicit drugs.  Currently, drug testing does not test for impairment or whether a person’s behavior is, or was, impacted by drugs.  Drug testing works best when implemented based on a clear, written policy that is shared with all employees, along with employee education about the dangers of alcohol and drug abuse, supervisor training on the signs and symptoms of alcohol and drug abuse, and an Employee Assistance Program (EAP) to provide help for employees who may have an alcohol or drug problem.

Why do employers drug test?

Alcohol and drug abuse creates significant safety and health hazards and can result in decreased productivity and poor employee morale.  It also can lead to additional costs in the form of health care claims, especially short-term disability claims.

How is drug testing conducted and how accurate is it?

Generally, most private employers have a fair amount of latitude in implementing drug testing as they see fit for their organization, unless they are subject to certain Federal regulations, such as the U.S. Department of Transportation’s (DOT) drug-testing rules for employees in safety-sensitive positions.  Federal agencies conducting drug testing must follow standardized procedures established by the Substance Abuse and Mental Health Services Administration (SAMHSA), part of the U.S. Department of Health and Human Services (DHHS).

While private employers are not required to follow these guidelines, doing so can help them stay on safe legal ground.  Court decisions have supported following these guidelines, and as a result, many employers choose to follow them.  These Mandatory Guidelines for Federal Workplace Drug Testing (also called SAMHSA’s guidelines) include having a Medical Review Officer (MRO) evaluate tests.  They also identify the five substances tested for in Federal drug-testing programs and require the use of drug labs certified by SAMHSA. These five illicit drugs are:  Amphetamines (meth, speed, crank, ecstasy),  THC (cannabinoids, marijuana, hash), Cocaine (coke, crack), Opiates (heroin, opium, codeine, morphine) and Phencyclidine (PCP, angel dust).

The most common method of drug testing is urinalysis. FYI Screening offers an internet-based drug screen system through it’s fully integrated partner, eScreen. eScreen developed eCup which is a patented urine collection device designed to allow for rapid, under-seal screening. A major advantage to the “smart” cup is that it doesn’t require human intervention or interpretation—which means no chance of human error. Our drug screening system uses drug labs certified by SAMHSA and a Medical Review Officer (MRO) to evaluate tests.

Who is allowed access to the results of a drug test? 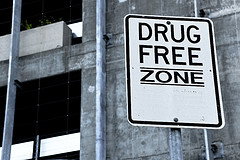 FYI Screening is pleased to announce a new integration with eScreen to provide drug-screening services to employers nationwide. eScreen’s online management system is power-packed with every tool you need to hire and maintain a healthy, drug-free workplace.

For a demo on how the eScreen system can better manage your hiring program click here.